I know that this has been a long time coming. But I am back now and ready to reveal my personal favorite villain from “Supernatural.” Dun Dun Dun (like we don’t already know who I am going to pick at this point……) This article by the way is going to be shorter then my other ‘villains’ pieces, because Crowley has encompassed so much of the show that I am going to do 2 articles detailing his impact throughout the years. This is just to hit the highlights of why I have him at number 1.

Crowley is a unique character in the Supernatural-Verse. I struggled with whether to categorize him as a bad guy anymore, period. He is still a demon however, and until he goes full ‘Team Free Will’ he ranks as a helpful bad guy. Crowley tops my list as the numero uno because he has outlasted or beaten every other villain that preceded him (so far) on this list. Considering this season has him and Lucifer duking back and forth for Hell who knows where Crowley will end up. Crowley though is one crafty son of a bitch, often claiming he is always steps ahead of the competition. And more often than not he is. Crowley is portrayed by the amazing and always wonderful Mark Sheppard.

Crowley says he was a 17th century Scottish tailor named Fergus MacLeod from Canisbay who sold his soul in life for three more inches below the belt. His mother Rowena is a witch, and taught him a few things about witchcraft. Useful things like how to make and use hex bags. He had a son named Gavin, who prior to season 9 he loathed. Feeling was mutual though as Gavin hated him right back.  Crowley rose up the ranks of Hell after becoming a demon to serve as king of the crossroads. I am assuming based on timelines he earned this after Lilith rose to command hell after Azazel was killed. He was Lilith’s right hand man, which is odd considering he was not a Lucifer loyalist. I can only imagine that he eventually would have double crossed Lilith at some point but was unable too.

Crowley is suave, and relies heavily on insults, sass and banter. He uses sexual innuendo in an effort to throw people off and make them uncomfortable, therefore giving himself an advantage. Crowley is an efficient business man and because he prides himself on integrity, when he makes a deal he honors it. This however doesn’t mean he won’t find loopholes and exploit them. He will find any way he can to turn the situation to his benefit. This was more than evident in his dealings with Bobby; Crowley willingly gave Bobby the use of his legs back but kept a hold of his soul, knowing that he would need it as leverage later.

Crowley is incredibly narcissistic, always believing he can out-clever anyone in the long run. Overall this proves to be true, only Sam and Dean having bested him more than once.  Crowley is also skilled in deception by being charming, charismatic and alluring. He can sweet talk anyone when he wants to, even someone as savvy as Jody Mills.

Crowley at the core is a survivor at heart, willing to do just about anything to achieve that goal. Overall he keeps a calm and composed demeanor but has at times appeared incredibly volatile underneath his smooth personality. You have to keep your wits about you when dealing with Crowley. As Dean put when encountering Crowley in season 7, “He will always find a way to bone you.” Crowley has taken the title of best chess master alive in “Supernatural” right now, with Azazel having been killed off. The way he puts himself in a position to screw over his enemies when you see the picture is brilliant. Which I will cover more in my Crowley through the years article.

He is also kind of a masochist, who tortures himself for fun. Builds up his resistance though in the long run.

So like I mentioned Crowley has a unique arc as a villain. Though the core of Crowley’s character remains the same, he is markedly different after the Season 8 finale.

Imagine what it must be like, to feel human emotions again after centuries without. I kind of feel like this is what Angelus went through after the gypsies forced his soul back. It was such a strange emotion for him that he became addicted to human blood just to continue to feel. He struggles though with how painful feelings actually are. Even Castiel acknowledged in 10×03 that “Humans can feel real joy, but also such profound pain.” In Demon Dean he finally had another person who was somewhat like him, a demon but still with feelings. It was kind of sad to see how elated he was running around with Demon Dean, only to be rejected by him in the end as well. And I think that Crowley really does want to be loved, or at least befriended, by the Winchesters.

This desire drives most of his character through season 10. Helping the Winchesters over running Hell, which greatly angers Rowena.  She tells him he’s gone soft because of this desire for love and acceptance. Crowley even tried to make changes to hell, telling Sam he was trying to be the good guy. In the middle of Crowley’s personal journey to try to be… well… better, Sam shot him as part of his deal with Rowena to remove the MOC from Dean.  Between the betrayal from Sam and Rowena’s hex bag, well he snaps. This scene undid a lot of his personal growth, returning Crowley to believing he is nothing but a monster.

He has immortality like all demons, and currently is over 350 years old. Crowley has incredible superhuman strength. Can press at least two tons and is stronger than humans, monsters, and average demons. He also effortlessly beat Meg, a powerful demon in her own right. Crowley cannot be harmed or killed by conventional means. In Caged Heat, Meg tortured Crowley by damaging his vessel’s insides and making him cough up blood, but he quickly recovers and has not shown any signs of lingering pain or damage.

The senses he has are very attuned. Crowley was able to smell that Castiel had been in the Impala and taste that the blood he and Raphael used was dog’s blood. That’s super creepy BTW, not an ability I want. Can teleport himself, or objects to him. He can teleport himself and others over great distances with ease. Proven to be quite proficient at this, as he was able to dodge Sam’s knife attacks by teleporting rapidly. He can teleport between Earth and Hell with no difficulty at all. He also once caused an angel blade to teleport into his hand and teleported Kevin Tran to another location by snapping his fingers.

To go along with that similar vein he has advanced telekinesis.  He is shown to be very efficient at this. Also he broke a girl’s neck without touching her and lifted another high before using combustion to obliterate her.  Furthermore, he was able to throw Jenna Nickerson against a ceiling with enough force to kill her. Crowley also was able to thrust Amara across a room. That is a considerable amount of power to fling a being like the darkness around.

Random Abilities that Make him a Super Badass 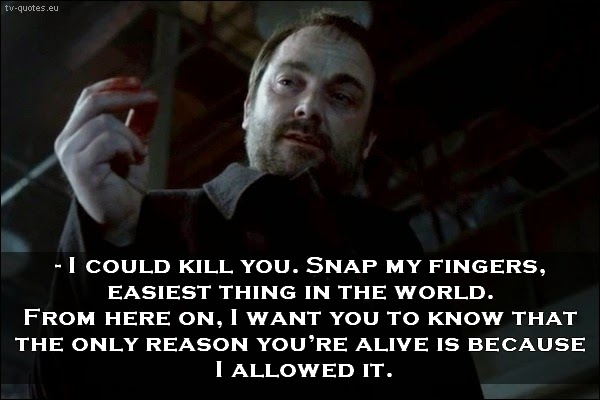 Pyrokinesis – Crowley can create and manipulate fire. Conjured a blazing fire in the fireplace in “The Devil You Know.” Also can use conjured flames to burn a message into a table in “There Will Be Blood.” He was also capable of engulfing himself in fire to create the illusion that he was burnt to ashes. He was also able to extinguish a ring of holy fire by snapping his fingers. Thermokinesis – Crowley made a painful burn on Sam’s hand with a touch in “All Dogs Go To Heaven.” Also made Ruby’s knife burn red-hot in “We Need To Talk About Kevin” to force Dean to drop it. In “Hell’s Angel“, Crowley was able to burn the words “Help Me” into the forehead of his vessel while fighting Lucifer inside of Castiel. That’s honestly one of the coolest things Crowley has done.

Crowley technically can resurrect people, but he can only do it through the power of a deal. He can make himself invisible when he wants to. Because his mother was a witch, he has proven himself to be quite adept at magic. He has proved himself adept at Enochian warding magic. Was also able to cast a spell that prevented creatures from escaping their vessels on an entire building in “Caged Heat“. He also learned the spell to bind Death in “Meet The New Boss.” He was also able to disguise his demons as Sam and Dean to fool Kevin. In “Clip Show” he cast a spell to kill Sarah Blake with a hex bag and previously caused Tommy Collins’ head to explode. He also used this in an attempt to kill Jodie Mills. He also created an illusion that was powerful enough to trick Cain.

Probably the most random ability Crowley has in his arsenal is his ability to communicate with animals. Give yourself a treat and watch this scene where he is questioning a hamster about his mother. You won’t regret it. Gives new meaning to the idea that Crowley really does get his information from little birds. Because who notices animals watching them right?

So I hope this goes to show you why I think Crowley is the baddest villain to date on Supernatural. Super smart, super powerful and just a BAMF. It is why I am going to do another article detailing his impact in the show season by season. I can never talk too long about this character. #LongLiveTheKing

2 thoughts on ““Supernatural” and the Number 1 Villain”