Hello all you Team Free Will Fans Out There! Welcome to This Week’s Poll

We are back with another poll for this week. Last week saw the fight for the best Star Wars Non Force User. It was a bitter battle to the end between long time nemesis’ Boba Fett and Han Solo. Boba however pulled just ahead thanks to some retweets by the creator of Boba, Joe Johnston, and Daniel Logan. So a great shout-out to them for joining in the poll and voting for your favorite.  It was a fun way to celebrate Star Wars week. Thanks to everyone for coming to the site and showing us some love.

On each week’s podcast the Malice Corp crew will each choose who they want to put in the ring. This week’s order was determined by whose pick got the most votes in last week’s poll. For this weeks battle we  are showing our love for Supernatural.  Thanks to the fact that Supernatural has a 2 hour season finale coming up we chose to represent it this week and battle it out for best Supernatural character. There are SO many wonderful characters to choose from it was so hard to pick just 1. But our pod-casters picks for the week have been determined and here are the contestants duking it out this week.

She may not be a living, breathing human, but the Impala is most definitely a character on the show. She is the one stable thing the Winchesters have had over their life. it has been their home, their sanctuary, and the place where they feel safest. As Chuck says in Swan Song: “It never occurred to them that, sure, maybe they never really had a roof and four walls. but they were never, in fact, homeless.” No matter what happens to her, be it big rigs or ghost possession, Baby always comes back better than ever. 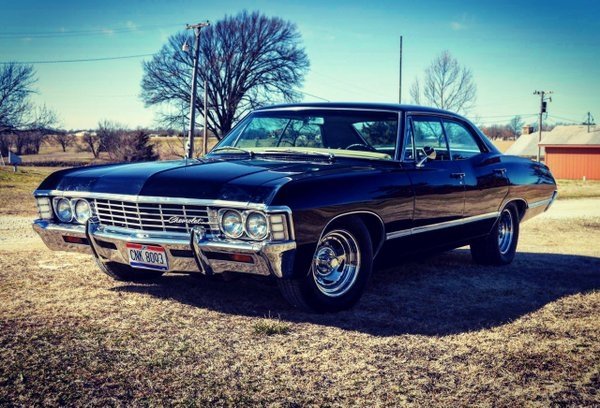 Gruff and Grumpy though he may have been, his loyalty to the Winchesters was unquestioned. He was their father in every way but blood. Bobby was the lifeblood of the hunter community in so many ways. He was their information center, and the one who manned the hunter phone lines. He never failed to keep Sam and Dean on the path they needed to be on. If you can believe it, Bobby, played by Jim Beaver, was actually only supposed to appear in one episode. But, he was so beloved that he became a series regular for 7 seasons. When he died in Season 7, he took a part of hearts with him into Heaven.

Brought to life by Misha Collins, Cas is our beloved angel in a trench coat. He may be awkward and dorky, and pop culture references fly over his head, but he is loyal and always tries to do the right thing. Cas changed the course of the show when he was brought on in Season 4. Lightening in a bottle is how show creator Erik Kripke described him, and I think he has proven that with the fans a million times over. He, like Bobby, was only signed on for a few episodes. But the fans spoke up and Kripke saw the treasure that is Misha Collins. They have kept him on since. Uriel may have been deemed the funniest angel in the Garrison, but Cas wins the best Angel in Garrison hands down. In this season, the Sassy Cas moments are the best thing ever.

Played by Felicia Day, Charlie was the character we didn’t know Supernatural needed. She was spunky and smart, saving Sam and Dean’s asses in her introduction to the show. Though she was terrified of monsters, she never let that hold her back from doing the right thing. All she wanted was to live out a grand adventure like in her favorite stories. She may have started off a timid kitten when facing monsters but she became just as kick ass a heroine, just like her idol Hermione. The little sister to the Winchesters, it was like having your heart ripped out when she was killed.

Is he good or is he Bad? Nobody treads that line better than Crowley, played by Mark Sheppard. He is the helpful Demon Team Free Will works alongside. He is sarcastic and probably the best mastermind in the Supernatural verse since Azazel died. Crowley is an unapologetic backstabber yet always seems to be there when the end times roll. He has been the 4th member of Team Free Will whenever a new apocalypse rolls in. Don’t let that fool you though, he is always in the end out for himself, even if he does just want to be loved.

Dean, the big brother. Loyal to an absent father. Self sacrificing to a fault and an over protector of those he loves. He is the most vulnerable of all the characters on Supernatural. Especially this Season, having to watch the desaintification of his mother. All his life, the idea of his mother has been idolized by Dean and watching that illusion shatter this season has been brutal to watch. Jensen Ackles is an amazing actor that can do it all, from the comedy to single man tear. Dean is so much more than the grunt he thinks he is, he is funny and flawed, and the person you want backing you up on any hunt. At times, he really is the child he never got to be at heart.

Papa Winchester, whose disappearance motivated the plot for Season 1. Played by the great Jeffrey Dean Morgan, John’s obsession with finding his wife’s killer drug him and his boys into the hunter life. He raised the boys on the road, teaching them to be smart and capable hunters on their own. Though him and Sam had a fall out over college, all John wanted for his boys was to be safe. John proved family was all that mattered when he sold his soul to Azazel to bring back Dean. Proving his fighting spirit though, John clawed his way out of Hell and saved Dean yet again at the end of season 2.

The Little brother, Rebellious to Daddies Plan. It’s funny, that Dean looks like Mary but acts more like John. And Sam looks more like John but his desires in life more closely resemble the mother he never got to know. All Sam wanted to be in life was normal. Instead, as it turns out, he was the vessel to Lucifer and slated to start the apocalypse. Nothing kills a normal life dream faster than that destiny. Sam beat that destiny however, proving that you can do anything when you have faith in yourself and your family. Though he has craved the normal life, Sam is always there to back up his family when the times get tough. He is a true Winchester at heart, sacrificing everything to keep your family safe. And he does it all without messing up his hair.

So, there you have this weeks contestants. I wish we could include more people on the list because there are so many characters we haven’t even mentioned. Drop us a line, we listen, and if enough people speak out, we may add your favorite to the list as well. Remember to follow Malice-Corp on twitter. You can follow Malice-Corp on Facebook. Please check out our YouTube channel, subscribe and watch last weeks podcast to see the picks! I hope you guys enjoy this weeks poll, and we look forward to seeing you all vote for your favorite. Keep Calm and Watch Supernatural until then!

Strong Bad E-mails: A Time when the Internet was Awesome

All Things Nerd 4.9: Stepping Out and Stepping Up – Weekly Nerd News