Welcome back everyone, to our new poll for the week. Last week saw the fight for the best horror movie franchise, in honor of Friday the 13th. We had a ton of fun reminiscing with people over some of our favorite horror movies. A lot of wonderful discussions were had with voters over the last week. So thanks to everyone who came out and participated you made the week a lot of fun. This week we celebrate the return of some of our overall favorite shows. CW has returned, answering questions that left fans reeling at the end of their respective seasons last year. But who had the most triumphant return back from hiatus? This is the question we leave to you dear voters. So let us see which show reigns supreme.

Last year we left off with the cliffhanger of Lian Yu exploding with everyone virtually trapped on the island outside of Oliver and his son. We pick up the season with the cool idea of being in the present and flashing back to each person’s story of how they got off the island, or if they perished there. It was definitely a cool idea, but one that makes you wonder just how realistic it was how many people made it off unscathed. Oh And also Oliver’s secret gets revealed?

When we last saw Rebecca Bunch, she just experienced the ultimate blow: After two years of obsessively courting Josh Chan, he left her at the altar to join the priesthood. But while season two ended on Rebecca (and her biggest booster, Paula) dramatically vowing to get revenge, did this season’s opener deliver? No one has seen or heard from Rebecca for two weeks — so where has Rebecca gone? And why is everyone dressed in medieval garb? 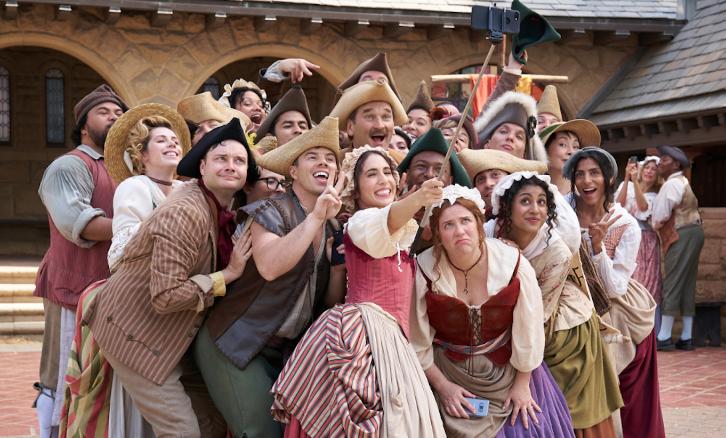 Last season left off with the wave-rider crashing and realizing they have completely broken time. It picks back up with Rip coming to them, having established a new agency that replaced the time lords. And he has gone full corporate douchebag, essentially dismantling the legends. And we get to see them struggle through having normal jobs until they can get the team back together. And don’t forget about trying to get Caesar out of Aruba….

Last season we saw Barry being taken to the speed force to restore balance to the world. This season loses no time in Barry being returned to Team Flash, but not the same as he left. Team Flash, led by Iris, has to figure out how to restore Barry to his right mind. I guess in the end true love does conquer all? All I have to say thank GOD Cisco is back to the Cisco I love!

The dark take on Archie comics doesn’t miss a beat in picking up after the dramatic end to season 1. Archie, having spent the night at Veronica’s, meets his dad at Pop’s for breakfast. He returns from the men’s room to find an armed robbery in progress. A gunshot goes off, but we don’t know who has been shot. Season 2 picks up immediately with Archie rushing his Father to the hospital. Riverdale once again seems to have a killer hiding in the town.

Last season ended with Supergirl defeating Rhea to save National City. but unable to do so before having to send Mon-El away from a – now toxic – earth’s atmosphere. This season Kara deals with the loss of Mon-El by focusing all her energy on being Supergirl and the mysterious new threat against National City. Alex confesses a secret to Maggie about their impending nuptials. A citizen of National City has a mysterious connection to Kara, and Lena Luthor makes a bold move.

Season 12 ended with Mary and Lucifer trapped, Cas supposedly dead, Crowley sacrificing himself (which apparently solved nothing as hell still rained down……) Kelly dead and Jack is a teenager not a baby. It picks back up with Dean and Sam trying to make sense of the clusterfuck that just happened. Watching Dean struggle with the loss of everything, Jensen seriously needs an Emmy nomination.

There you have it folks, those are this week’s combatants. Vote for your favorite CW Premiere. Also, if you want to see why we chose who we did then make sure to listen to this week’s podcast. You can find it either at Podcasts.com or YouTube. Heck, while your there you can even subscribe and that way you’ll know when our next podcast is airing.

Finally, if you would like further insights into the shows seasons, click on their name and it will take you to their respective wiki pages. Voting goes until November 10th, 11:59:59 PM PST. So, don’t dilly dally. Get your vote in and help give someone on the podcast bragging rights for this week.

Looking for some non-canon fun? Check out “Star Wars Scoundrels” by Timothy Zahn