Reliving Barrowman and His Highlights Through 5 Wonderful Seasons

So for those of you still in a little bit of shock like I am regarding the Arrow finale, I offer you a bit of levity. Time to take a trip through the Arrowverse and relive some of the amazing moments John Barrowman brought us. And, I am not just talking about the show! I am talking about the legendary antics he gave off camera. The man seems to be an utter and complete delight to work with, and I am sure his levity will be sorely missed. The dude just knows how to brighten up any moment, you know? Case in point (see below.) So without anymore rambling, let us get to the memories!

On Camera as Malcolm, Barrowman was on point. He brought his A game each and every scene and delivered amazing, after  amazing, performances right up till the end of Season 5. Every time he appeared in an episode you just knew something great was about to happen. From Bad Guy to semi quasi Good Guy to loyal (but hated) father, Malcolm had quite the journey on Arrow. Malcolm was a character like Oliver, motivated by loss. Malcolm with the loss of his wife, Oliver with his father, but instead of doing good he went very bad.

Man, he can be an intimidating badass. Also, I miss Tommy.

This was the episode I saw so many Spiderman parallels. Malcolm is the Green Goblin, Tommy is Harry, and Oliver is Spiderman. This was also the episode where we saw how cruel Malcolm could be. Trying to force his son into shutting down his dead mothers clinic? Ouch!

This is the first time we get to see the Hood and Malcolm square off. It was a pretty bad ass fight, but Oliver ends up getting knocked out. Malcolm plays it well, the panic when he realizes Oliver is the hood.

This was the best episode for Malcolm all season. There are 2 scenes highlighted below, the final fight with Oliver and his conversation with Tommy. I think that John was amazing in his scene with Tommy. I don’t think Tommy was acting afraid, I think John pulled it off so well he was scared for a few seconds. It is crazy how Barrowman goes from being completely calm to a complete lunatic, flawlessly.

No one can deny Malcolm makes the best entrances on Arrow. I love that no matter what he can always get into the ArrowCave. There is a reason he is known as the Magician.

Oh man oh Man. Malcolm was just off the hook in this scene, the dialogue and the fight. The angst between him and Nyssa.

Do the fight scenes between them ever get old? No? I didn’t think so.

When he comes to deliver the news to Team Arrow that Oliver was killed by Ra’s in the duel. The subtle emotion and coldness he plays with this in this scene, I wish could have been done more. You almost believe that he does feel guilt over Oliver’s death.

This was a heartbreaking thing for Thea to go through. You could actually see the shock and devastation on Malcolm’s face. And probably rightly deserved.

This really show’s Barrowman’s range as an actor. Begging is not a look we see on Merlyn, but he was truly terrified in this scene.

Malcolm doing what Malcolm does best. Saving his own skin.

Or in Malcolm’s case, Ra’s Al Ghul. And power does look oh so good on him.

He is such a snarky, sarcastic ass, I love him so much. The second clip because I so enjoy Darhk getting his ass beat.

This whole scene gives me chills from top to bottom every time I watch it.

Malcolm is Malcolm but Thea seriously kicks some butt here.

Malcolm is despicable here with Thea. What he again turns her into is just so wrong..

I loved all of these 4 part crossovers. But, seeing what could have been, the life they might have led, was heartbreaking. And all of these fights were amazing.

Everything in this episode was epic. Knowing it was coming down to the finale. And knowing the finale would be Barrowman’s last episode, he totally brought his amazing game to play. And boy were his last 2 episodes epic performances.

Farewell Malcolm. If you are in fact dead. No Body No Proof. If he is in fact dead, he went out on his own terms, and he died doing what has made him such a lovable villain. Protecting Thea.

So, now that we have seen how amazing he is on camera, here is some of John Barrowman and his amazing off camera antics. This man is a gift to be treasured, and I cannot wait to see what he has in store for us post Arrow.

The prank he pulled on the Arrow set:

First off this proves that he is at heart just a giant nerd like one of us. Which is amazing. And, the fact that he fangirls (boys?) over Stephen Amell is priceless. If you put John in front of an audience, you never ever know what you’re going to get. But, you know it will be memorable. Like at this panel at Dragon-con where John is explaining how he was invited to be on Arrow. Nobody was prepared for a story that begins with his contract offer and ends with an old fashioned titty twister while Oliver was chained up?

The Time at Comic-Con

This man has no shame. I need a photo op with him now for so many reasons.

The multiple times he moons in Photo Ops.

Apparently he tries to do stuff like this all the time. I NEED a photo-op with him ASAP. 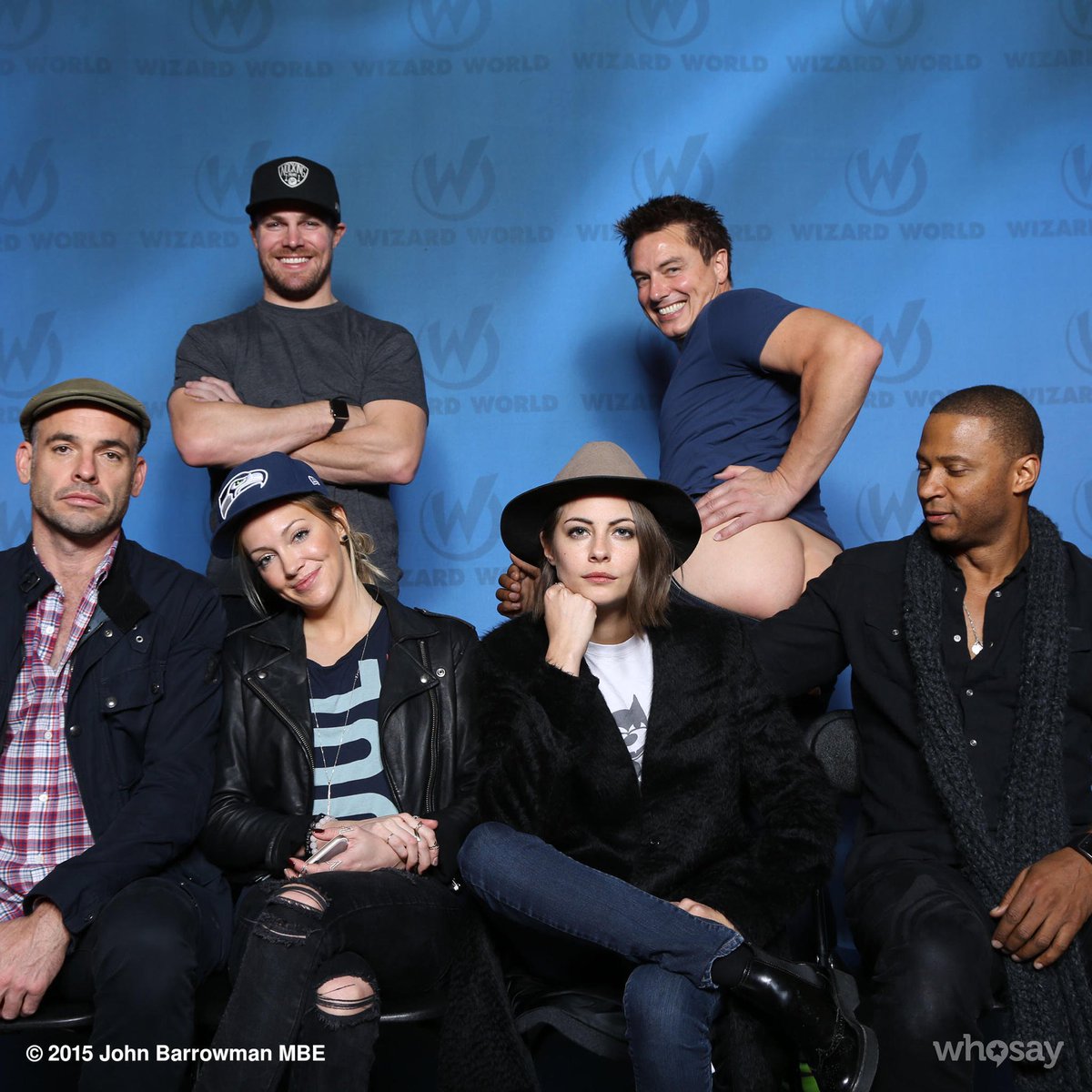